The situation of the Ottoman Empire in the 19th century, the economic, social and cultural developments in the capital of Istanbul also affected the islands located right next to Istanbul. The Art Nouveau movement that emerged in Europe at the end of the 19th century and the beginning of the 20th century is a part of a change and transformation in the capital of the Ottoman Empire, as in other developments in Europe.

In line with the changing political and economic relations with the Western countries and Tanzimat reformations took place in the 19th century, a new bourgeoisie (mainly non-Muslim and Levantine) began to gain importance in a different course from the past centuries. Thus, a new way of life was started to develop. The buildings, almost all of which were built in the 19th century in Buyukada, Istanbul and later, reflects this new lifestyle in architecture. The islands of Istanbul, which were used as retreats and exile locations throughout the history, became now among the most popular resorts as of the last quarter of the 19th century. In accordance with the architectural trends of the period, Gothic, Baroque and Empirical styles were seen in the Neo classical styles. The Art Nouveau style was the harbinger of modern architecture as an innovation.

The study focuses on the family houses which presented Art Nouveau style in Maden Mahallesi, Büyükada. The written and visual documents obtained from the archives and libraries as well as on-site analysis and photographs were used and the use of Art Nouveau Style on the facades of the buildings were evaluated accordingly. 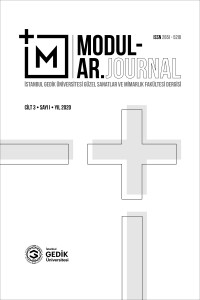